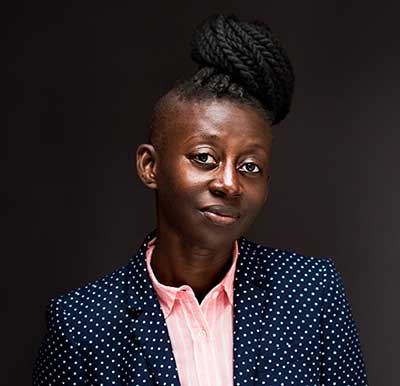 “For Africans, community isn’t just your neighborhood; it’s also your chosen family, the place where you have a sense of deliberate belonging. That’s what QAYN aims to be.”

Before she founded the Queer African Youth Network (QAYN), Mariam Armisen worked in the fashion and retail industries. But her desire for a more inclusive LGBTQ* movement influenced her to change direction. In 2010, Mariam founded QAYN to build regional solidarity in Francophone West Africa and propel the movement for LGBTQ rights.

“As a queer Burkinabé woman, I know what it’s like to struggle with your sexuality and gender identity,” says Mariam. “I felt the voices of young, queer Africans were missing, and I wanted to change that.”

Mariam used Facebook to connect with emerging LGBTQ groups in Nigeria, Ghana, and Cameroon. And QAYN quickly moved from being online-only to having a presence on the ground in Togo, Nigeria, Burkina Faso, and Cameroon.

QAYN’s mission is to promote the safety and well-being of LGBTQ Africans and their allies. It does so through community organizing, movement building, leadership development, documentation, and advocacy. It is a hub for French-speaking, LGBTQ West Africans to locate the support they need to mobilize in their communities.

“I wanted to create safe spaces where young, African, queer folks could come into themselves and feel welcome, where they could learn, support, and share with each other,” Mariam explains.

Mariam is proud of the success QAYN has had in bringing visibility to the complex lives of queer women in Francophone West Africa. But she confesses the work is not without difficulties:

“We work in an environment that’s increasingly unpredictable, and sometimes it feels like we are fighting against the wind. But we continue to catalyze broad-based, proactive support for securing the human rights of LGBTQ people in West Africa.”

Mariam splits her time between Ouagadougou, Burkina Faso, and Oakland, CA. She manages QAYN’s initiatives with the support of five staff in Ouagadougou and a small board of advisors across the African Diaspora.

“QAYN has grown substantially because people believe in our vision, but the network remains small in order to engage our members in ways that have lasting impact. When I look at the time, energy, and love people have contributed to QAYN – and how far we’ve come in just five years – I am moved to tears. Our success shows what is possible to achieve with limited resources, but an abundance of dedicated volunteers. Our communities stepped up, and we built this organization together.”

One of QAYN’s most popular projects is Q-zine, a bilingual online magazine by, for, and about LGBTQ Africans. Q-zine celebrates the creativity and cultural richness of African queer life — both in Africa and across the Diaspora. Mariam draws inspiration from her mother and grandmother, who she describes as “African women who were never satisfied with being put in a box.” These bold women encouraged Mariam to act on her own terms — personally and professionally — which gave her the courage to start QAYN.

“My dream is for QAYN to be at the forefront of a community-led, intersectional movement for social justice in West Africa.”

* LGBTQ is the acronym QAYN uses, whereas FJS uses LGBTQI.